Discover Berlin beyond the popular monuments, and get to know how life is lived in some of the most unusual districts of the capital. This tour is a perfect compliment to the Berlin guided tour. 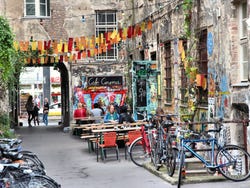 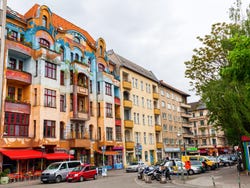 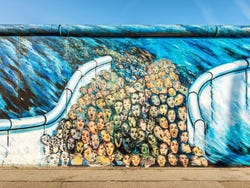 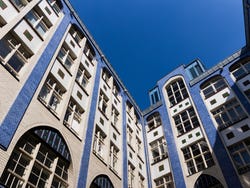 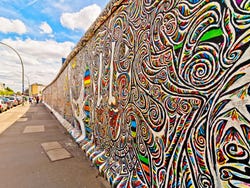 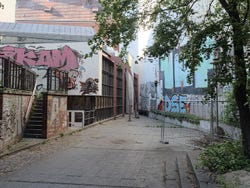 We'll meet at 4 pm at the Brandenburg Gate for a guided tour around Berlin's alternative side.

We'll walk along the iconic Oranienburger Straße, the street where the Jewish population lived in the late 19th and early 20th century. We'll then stop at the art nouveau courtyard complex of Hackesche Höfe.

Next, we'll visit one of the most alternative and multicultural neighbourhoods of the city, Kotti. Here you'll find punk bars, hip clubs and some of the best halal restaurants. Did you know that this is the birthplace of Turkish hip hop?

The tour will continue to Kreuzberg to see the Astronaut Cosmonaut graffiti by Victor Ash. You'll be struck by its connection to the war. Then we'll discover why Oranienstraße is one of the favourite places for young people. Following on, we'll walk along the Bethaniendamm before arriving at the Baumhaus, a sustainable space in the heart of the capital.

The Kopi neighbourhood is a must on our alternative Berlin tour, where punk culture, anarchism and Marxism intermingle. We'll also go to the Yaam market to see some African food stalls and, if we're lucky, maybe catch a reggae concert.

The tour will end while admiring the more than 100 murals in the East Side Gallery.

To ensure that the tour is affordable, we'll use Berlin's public transport. To take part you'll need to have an AB-zone transport pass. If you don't have one, the guide will help you to buy one.

The temperature and wellness of all those taking part in the service will be monitored daily, excluding and maintaining in quarantine any who display fever or symptoms.

The temperature of all attendees will be taken, and admission will be denied to those with a temperature of more than 37 degrees Celsius (99 Fahrenheit).

You can book up until 11 hours before the activity as long as there are still places. Book now to guarantee your spot.

US$ 16.20
No hidden fees or surcharges
Free cancellation up to 6 hours before the service starts
Book

Where does the activity end?

Where does the activity end?

Good on the artistic insight (could give a bit more detail, on techniques and methods) but really poor on the facts - eg. East Germany was communist but NOT part of the Soviet Union!

I travelled with friends
10

We had fun. Very entertaining and complete. Rafa guided us through graffiti areas and Berlin that is less touristy but no less interesting for that. Totally recommendable. Opinion translated. Show original.

I travelled with my partner
8

I travelled with teenagers
10

9.60 / 10 13,845 reviews
Discover the monuments, streets and squares of Berlin with this tour, ideal to get to know the German capital at first glance. What's more it's FREE!
Free!
Book
like