Potsdamer Platz, once one of the noisiest public squares in Berlin, was flattened during the allied bombings at the end of World War II. It was then divided in the middle by the Berlin Wall and left empty. Nowadays, the square is completely restored and has regained its place as one of the most engaging squares in Berlin.

During the nineteenth century Potsdamer Platz was home to an important cultural and commercial activity. The square still preserves some remains of that time, for example, the first manually operated traffic light in Europe.

When the war was over, Potsdamer Platz was divided between West and East Berlin and the Berlin Wall cut through the square. During the thirty years of separation, the square became completely desolate.

When Berlin was reunified in 1990, the government transformed the forgotten square into one of the most modern areas of the capital, constructing a series of representative landmarks.

The Haus Huth (Alte Potsdamer Strasse, 5) is the only edifice in Potsdamer Platz that survived the Second World War. The six-story building remained standing thanks to its steel structure, which was completely revolutionary for its time.

Potsdamer Platz also houses the remains of the Grand Hotel Esplanade of which only 10% could be saved. Although it was restored after the war, it was half abandoned after the Berlin Wall was built. When plans to build the Sony Center were designed, it was settled that the remains would be integrated into the center.

Although some of the Berlin Wall is still standing in the square, the whole precinct was redeveloped after the German reunification.

To the west of the square are two noteworthy blocks: the Sony Center and the Quartier Daimler Chrysler.

The Sony Center has a stunning large glass and steel dome that is brightly colored at night. The dome, designed by Helmut Jahn, is a shelter for numerous Berliners and tourists that enjoy the center’s terraces and restaurants.

The Daimler-Chrysler site, located on the other side of Potsdamer Strasse, is less touristy and less-well known. Inside is a relaxing garden courtyard.

Since the square is located near Brandenburg Gate, you can take a short walk and see both landmarks on the same day. To get from one point of interest to the other, follow the gap on the floor that marks where the Berlin Wall once ran along.

Potsdamer Platz also offers stunning views of central Berlin from the top of Kollhof-Tower. On the 24th and 25th floor (over 100-meters high) is Panoramapunkt, the building’s observation deck. The main entrance is situated on Alte Potsdamer Strasse. 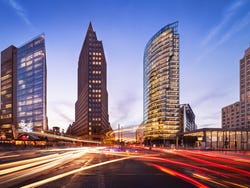 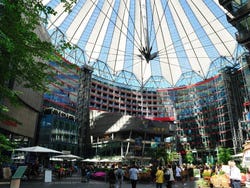 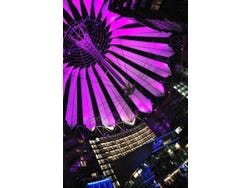 Panoramapunkt
Every day from 10am to 8pm (in winter until 6pm).