The Neue Wache is an impressive neoclassical building located on Unter den Linden, Berlin’s main thoroughfare. It has a striking façade with a portico with Doric columns.

King Frederick William III of Prussia instructed the construction of the new guardhouse in front of his palace. In 1931, the edifice was remodeled as a memorial for the victims of World War I. In 1960, it became a place to commemorate the victims of the German Fascism. Nowadays, it pays tributes to all the victims of war and dictatorship.

The Neue Wache was remodeled on several occasions since its inauguration in the early nineteenth century. East Germany placed an eternal flame in the center of the hall in 1960, and the relics of an Unknown Soldier were kept here.

The building houses a touching statue by Käthe Kollwitz that depicts a woman holding her dead son in her arms.

The sculpture, placed on the floor underneath a large opening in the roof, exposed to the harsh weather conditions, bearing the cold and rain, represents the suffering of the victims.

The new guardhouse is not only extremely well located on Unter den Linden, but it is also a unique monument that is worth visiting.

The statue of the mother holding her son is extremely moving, especially as it contrasts with the grandiose and empty building, transmitting a sense of loneliness and sadness. 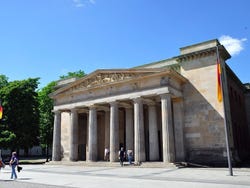 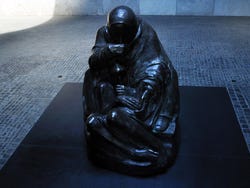 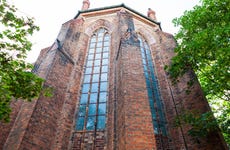