Neues Museum is home to some of the most famous archaeological elements, like the Nefertiti Bust and other samples of prehistoric and protohistory Egyptian art. Located on Museum Island, it remained closed for seventy years and reopened to the public in 2009. It is currently one of the most popular museums in Berlin.

Founded between 1843 and 1855, the building was severely damaged during World War II. During the following forty years, the ruins were exposed to inclement weather. It wasn’t until 1986 that East Germany began working on the reconstruction. However, the works were stopped when the Berlin Wall fell.

In 1997, the British architect David Chipperfield was selected to lead the reconstruction project, but the works didn’t start until 2003.

The halls that had been demolished by the bombing were rebuilt according to the original blueprints, with essential changes made by Chipperfield.

The “New Museum” was reopened in 2009 after being closed for over 70 years.

Neues Museum houses the Egyptian Museum. It features over 2,500 objects displayed along 3,600 square meters divided on three floors. It is probably the most important section of the gallery.

Visitors can see numerous mummies, funerary figures that were used for the burial rituals, and a vast number of objects exposed in an incomparable setting. Nevertheless, the highlight of the museum is the Nefertiti Bust, preserved in perfect conditions since its creation in 1351 B.C.

These exhibits feature items from the Stone Age, the Golden Age and the Bronze Age, as well as other statues and findings from the Roman period.

The highlight of these collections is a three-thousand-year Gold Hat able to predict lunar eclipses. Another item worth mentioning is the Statue of Helios from the second century.

The “New Museum” is one of the most spectacular museums in the world, not only for its unforgettable collection, but also for the incredible architecture. Each room is distinctive and surprising.

We consider it the best museum in Berlin, along with the Pergamo Museum. 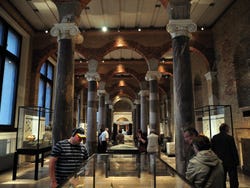 Inside the Neues Museum Berlin 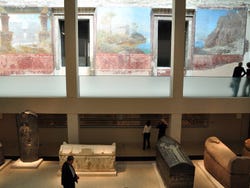 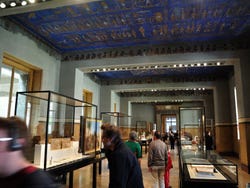