Charlottenburg Palace (Schloss Charlottenburg in German) was extended in 1702, a year after Friedrich crowned himself. He had previously sent the royal architect to study architecture in Italy and France, especially the Château de Versailles. Sophie Charlotte died in 1705 and did not see the finished version of the Palace. In her memory, the King, renamed the mansion Charlottenburg. It had formerly been called Lietzenburg, after the district in which it was constructed.

The British air force bombarded Berlin in 1943, destroying part of the Palace. Some of the building’s decoration could never be fully restored.

Visitors will be accompanied by an audio guide throughout the visit of the Palace to learn about the past and most interesting stories of what happened in each room, transporting tourists to when the royal family enjoyed the residence.

Some of the halls, ceilings and walls preserve the original furniture, decoration and frescoes. Unfortunately, the second floor of the Palace was not as lucky and was badly damaged during World War II, ruining the beautiful decorative elements.

One of the most charming areas of Charlottenburg are the extensive and well cared for gardens designed in 1697 in a French Baroque style and reformed in an English romantic style in 1788. The enclosure was also badly hit during the air raids and were redeveloped in 2001, giving the Gardens a baroque style again.

The gardens of Charlottenburg are a haven of peace in the city of Berlin, in which it is extremely enjoyable to stroll around, resting by its lake or visiting the Belvedere Tea House, dating from 1788.

Charming palace, but the gardens are even better

The Palace is exquisitely furnished, and visiting its various rooms is quite compelling since it has been restored as it was when the building was inaugurated at the end of the seventeenth century.

If you’re pressed for time, we recommend visiting the gardens and marveling at the exterior of the Palace. The entrance to the gardens is free. 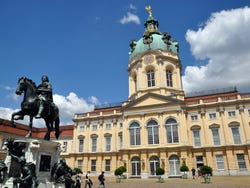 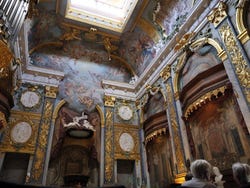 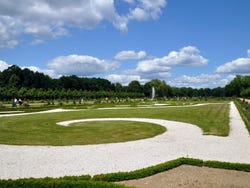