The creation of Kunsthaus Tacheles

Built before the war as a shopping center in the Jewish district, it was occupied by an Artist’s collective after the fall of the Berlin Wall and was transformed into an alternative art and cultural center offering original exhibitions, concerts and a Beer garden.

After the reunification of Germany, the building was partly demolished. It was in a poorly state as it had never been renovated since its inauguration in the early 1900s. Before the whole building could be bulldozed, it was occupied by a group of artists that managed to save it.

After the fall of the Berlin Wall, a subculture formed that fomented the autonomy, improvisation and spontaneity.

Many inhabitants squatted the empty buildings when the borders opened, and East Germans moved to West Berlin. The Berliners saw it as something positive to prevent the buildings from decaying.

The building had five floors with numerous workshops for artists and bars in which to enjoy a drink surrounded by sculptures and paintings while appreciating live music.

Kunsthaus Tacheles also included a garden where eccentric artists displayed their works of art and sold them to the center’s visitors.

With time Kunsthaus Tacheles became one of the most emblematic landmarks of Berlin and its visit was a must before the building was abandoned in 2012. You either loved it or thought it was a bit shaby. 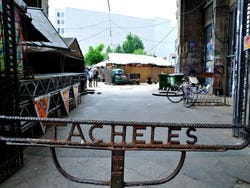 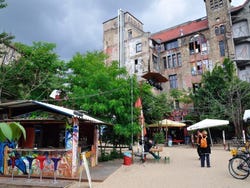