Up until 1814, Pariser Platz was known as Viereck (meaning "The Square" in English). After the Battle of Paris against Napoleon and his troops, the square was renamed Pariser Platz. It was the largest piazza in Berlin, where the armed force would parade over the centuries, including the House of Hohenzollern and the German Democratic Republic.

When the German army began to be short of reserves and Berlin was bombed by the Allies, the buildings flanking the square were destroyed. The only landmark left standing was the Brandenburg Gate.

After World War II, the Berlin Wall was erected through the middle of the square devastating what little was left of it. It became part of the “death strip” of the Wall.

When East Germany became part of West Germany in 1990, Pariser Platz was redeveloped including Adlon Hotel, to create the perfect setting for the Brandenburg Gate.

This public square is worth visiting both during the day and at night. It is one of the most-visited landmarks in Berlin, since it offers the perfect setting to take the best photos of Brandenburg Gate, one of the most iconic symbols of Berlin. 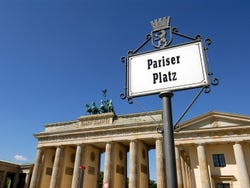