At the beginning of the Second World War, Hitler assured Berlin inhabitants that the German Air Force (Luftwaffe) would impede any country from bombarding the capital; however, when Nazi Germany began to lose its first conflicts, the authorities began to build bunkers in the principal cities, especially in Berlin.

During the Cold War, this underground system of tunnels and bunkers became essential for both sides and in some cases, were renovated, improved and prepared for a possible conflict between the Allies and the Soviet Union. For example, West Berlin spent millions to construct multi-use buildings like subway stations and underground car parks that would save the population from a nuclear war.

A knowledgeable guide will guide through the underground tunnels to one of the 3,000 shelters that are located underneath the capital of Germany.

During the tour, you’ll learn what the bunkers were used for during the war, who used them and how many people fit inside them during the last days of the war. Your guide will also tell you fascinating and startling true stories that happened underground.

The nonprofit company offers tours in various languages, including English. You cannot book a tour in advance, so we recommend you get to the Museum a little early to make sure you get a place in the tour.

All types of tours

The Museum offers several types of tours, all of which are interesting and worthwhile. They vary depending on the day and time:

The best experience in Berlin

Unless you suffer from claustrophobia or don’t like being underground, these tours will transport you to the end of World War II. All the tours will exceed your expectations. 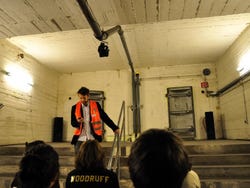 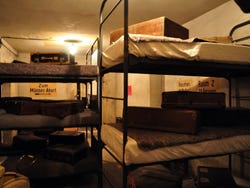 Ticket office: daily from 10am to 4pm (approximately, it depends on certain days)
The guided tours take place at different times.