The literal translation of Ampelmännchen is “little traffic light men”, a small green and red man with a hat that can be found at numerous pedestrian traffic lights in Berlin. It is one of the few features to remained from East Germany.

Designed in 1961 in an almost childish way, the Ampelmännchen has a curious hat, a big head and short legs, but is one of the most cherished symbols of Berlin and now makes a great souvenir.

With the unity of Germany in 1990, there were several attempts to standardize all the traffic lights, but it was never achieved. Thus, there are lots of different types of traffic lights in Berlin.

In 1995, Berlin organized solidarity campaigns for the Ampelmännchen, defending that it was part of East Germany culture. The campaigns were successful and most of the pedestrian lights that had been changed were once again replaced with the Ampelmännchen.

Nowadays, the Ampelmännchen is placed throughout Berlin. It has also become one of the city’s most popular symbols, printed on t-shirts, socks, glasses and mini traffic lights. 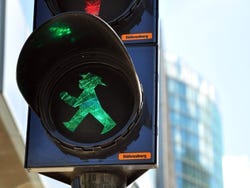