Along with Unter den Linden, the Kurfürstendamm is one of the most famous boulevards in Berlin. It begins at Kaiser Wilhelm Memorial Church and runs three kilometers to the residential area called Halensee in the west.

The Kurfürstendamm was initially a type of path that led to a hunting lodge in Grunewald, constructed in the sixteenth century. At the end of the nineteenth and beginning of the twentieth century, it was transformed into one of the most praised avenues of the city. It also became the hub for intellectuals and artists, which was accompanied by the construction of the first theatres, cafés, cabarets and night clubs.

The area was gravely damaged by the air raids during the Second World War. The restoration of the causeway did not take place until the 1950s.

The center of West Berlin

During the 28 years that Berlin was divided by the Berlin Wall, the Kurfürstendamm became the heart of West Berlin. The hub of East Berlin was Alexanderplatz.

In this period, the Kurfürstendamm could be compared to the Champs Élysées in Paris with multiple stores, restaurants and companies opening on this boulevard.

After the German reunification in 1990, the Kurfürstendamm became less important and Potsdamer Platz was transformed into the hub of the city.

The high part of the thoroughfare and its continuation; Tauentzienstraße, are one of the capital’s most important shopping areas. The most important international and national retail, electronic and sports brands are located here.

There are also various shopping malls. One of the most renowned is KaDeWe, the Harrods of Berlin (near Wittenbergplatz metro station). Curiously, its name is an acronym for Kaufhaus des Westens, which literally means Department Store of the West.

The lower part of the street is quieter and has more high-fashion boutiques. 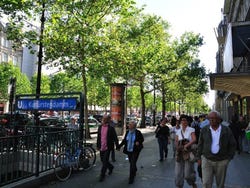 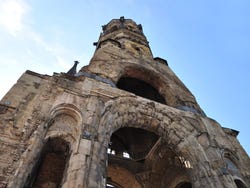 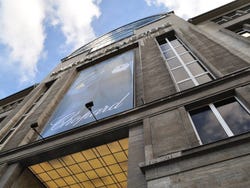 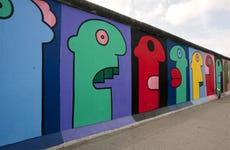