One of the most iconic symbols of Berlin is the Trabant. The city is packed with photographs, graffities and souvenirs of this unique car. But what makes this car so popular?

In German, Trabant means “companion” or “satellite”. Manufactured in the German Democratic Republic since 1949, it became the East German car by excellence. The Trabant was a small and inexpensive vehicle. The manufacturer practically had the automotive monopoly in Soviet-ruled Germany.

The Trabant has a two-cylinder motor and its body is made of resin mixed with cotton and although it was far from being a stable car, it became one of the most coveted cars capable of transporting four adults and their luggage.

After signing up to a waiting list, East Germans sometimes had to wait up to ten years until they received their car. Some citizens would even sign up their new-born on the waiting list, to get the car when the child was old enough to drive.

The small Trabant played a major role in the lives of East Germans, especially after the Berlin Wall was put up. Many tried to escape to the West in their Trabant, as you’ll find out when you visit Checkpoint Charlie Museum. 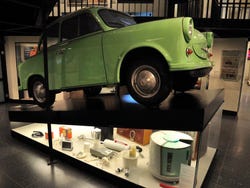