Berlin Cathedral (Berliner Dom) rises majestically on Museum Island with a green-colored copper dome. The island is surrounded by the Spree River.

Sitting in front of the Lustgarten park, it is considered the most prominent religious edifice in Berlin.

The first temple built on the site was a Roman Catholic church during the fifteenth century. The current building was constructed between 1894 and 1905 on the remains of a Baroque Cathedral dating from 1747, in front of the Berlin Palace.

The Berlin Cathedral became the main church and burial place of the Hohenzollern dynasty and their court because of its proximity to the Palace.

In 1944, a bomb fell on the dome of the temple and wrecked the inside of the building, like so many other buildings and churches in Berlin.

The reconstruction of the Berlin Cathedral started in 1975, but it was long and costly, taking several decades to complete. It was finally finished in 2002.

The interior of the Cathedral is immense with a striking main altar made of white marble and onyx. Another highlight worth discovering is the imposing Sauer organ that was built at the same time as the original Cathedral. It was the largest organ in Germany when it was inaugurated.

Another interesting area of the Cathedral is the Imperial Staircase. It served as the royal couple's main entrance to the temple. The beautifully decorated staircase leads to the Baptismal and Matrimonial Chapel and to the imperial gallery.

The Hohenzollern Crypt is located below the Cathedral. It is one of the building’s treasures, as it is the most prominent dynastic vault in the country. It holds the remains of the Hohenzollern family.

The crypt holds over 90 tombs all belonging to the royal family, dating from the end of the sixteenth century until the beginning of the twentieth century.

Over 500 years of funeral traditions from Prussia and Brandenburg are held in the crypt thanks to the sumptuous caskets and sarcophagus.

A dome with a view

The climb to the top of the dome is a bit like walking up to an abandoned attic, since the staircase is not in very good conditions. Nevertheless, climbing the 270 steps is worthwhile, as the views of central Berlin are magnificent. 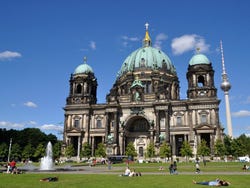 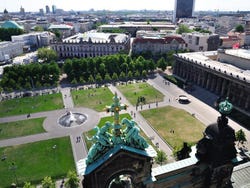 Views from the Berlin Cathedral dome 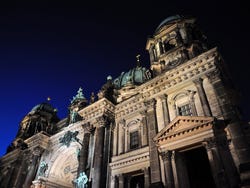