The U-Bahn is Berlin’s subway system. It stands for “underground railway” in German and was built in 1902. The city’s underground played an important role during World War I, World War II and the Cold War, suffering great damages during these years, and was rebuilt numerous times. Subsequently, when the city was divided, the U-Bahn was also split and the closest metro stations to the Berlin Wall were abandoned.

Today, the Berlin U-Bahn is one of the most comfortable and easy to use metro networks in Europe. It gets to the city's various attractions rapidly and smoothly.

The U-Bahn has nine lines that travel both underground and above ground. 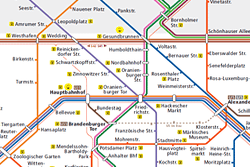 On week days, the Berlin U-Bahn is open from 4am to 1am and on weekends the U-Bahn runs 24 hours a day.

During peak hours, trains run every 3 to 5 minutes. The rest of the day, a train runs every 10 minutes and at night every 15 minutes.

Check out our articles on the various fares and other means of transport. 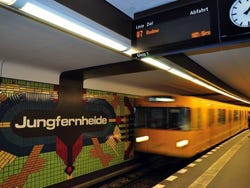