Although Tempelhof’s airfield played a relevant part during World War II and during the Cold War, it was closed due to economic losses in 2008. Afterwards, it was transformed into a public park called “Tempelhofer Feld”.

In 1909, short-haul flights took place over the airport space, including one of the first air shows in the world. However, Tempelhof was not appointed an airport until 1923. Three years later the airline carrier Lufthansa was created, and established its base at Tempelhof.

Thanks to its privileged location in the city center, Tempelhof became one of the world’s airport with most air traffic. The airport was also the largest building in the world until The Pentagon was built.

When the capital of Germany was divided into four parts after the end of World War II in 1945, the airport was fully controlled by the American forces.

In 1948 the Soviet Union blocked all traffic by land and water to East Germany. West Germany decided to help the East Germans by flying over the area and dropping tons of food, coal and other supplies. The “Berlin Airlift” lasted 11 months and carried out 300,000 flights. The airlift was extremely successful, carrying more goods into East Germany than the previous years by rail, thus the Soviet authorities lifted the blockade in 1949.

After the fall of the Berlin Wall, the American base was dismantled, and the Tempelhof Airport was once again used for commercial air transport. The unification of Germany was the beginning of the end for the airport, since it began to generate millionaire losses.

The iconic airport was closed in 2008 and two years later, it was remodeled into the city’s largest park. Tempelhofer Feld measures 380 hectares, exceeding the legendary Central Park in New York City. 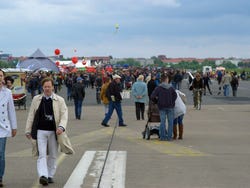 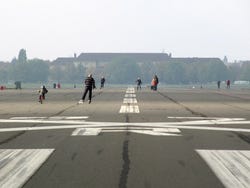